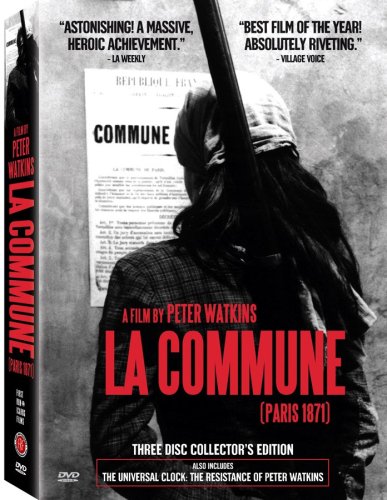 The films of Peter Watkins are events, and LA COMMUNE may be his magnum opus. Revolutionary in form as well as content, LA COMMUNE captures the historical moment of the Paris Commune of 1871, when a revolutionary government spontaneously formed by the people of Paris defied the national authorities during the Franco-Prussian War. A cast of hundreds re-create the events, and competing camera crews - one from the "official" government station, the other run by the Commune - capture the drama as it unfolds, from different perspectives. An exhilarating experience with special relevance to our media-saturated present, Watkins sweeps us up into the events, showing the aspirations and mandates of the revolutionary government, even as the fighting continues that will bring it to an inevitable bloody end. A penetrating critique of modern media, no one who meets the challenge of LA COMMUNE will be unchanged by the experience.

Peter Watkins, in his ambitious epic, La Commune, tells the riveting story of the French revolutionary, proletarian group established by Parisian citizens in 1871, as rebellion against the National Assembly lead by Adolphe Thiers during the Franco-Prussian War. In his inimitable style, Watkins builds a meta-narrative around a journalist whose propaganda is destroyed by Communard broadcasts, as they document abject poverty and chaos throughout their beloved city. Over 200 non-actors were recruited to play Parisian revolutionaries, as the camera follows them for interviews, showing how they have organized a small military, food banks, housing, and makeshift offices. Watkins gives viewers tours of the sets, to remind us of how our present reality mirrors what was happening historically, and to formally challenge standard-format documentary filmmaking. As journalism's aim, often, is to present facts objectively, La Commune captures the essence of the Communards' rage, while showing the nuances of the conflict from both sides, as a way to more personally present the story. Nearing six hours in length, the film is excruciatingly detailed, leaving one with what feels like a complete picture. A bonus documentary, "The Universal Clock," educates about Watkins' directing style and about the making of La Commune. Mustering up the patience to watch this feature will result in an education about revolutionary thought, from the angles of both the Parisians and Peter Watkins himself. --Trinie Dalton

You're viewing the new Europeana experience. Go to the original Europeana.

Explore the heritage of sport across Europe

Gymnastics organisation which was popular across Slavic regions

A cup of wonder: how tea from China conquered the world

Exhibition
A century of technology

Save your favourite items and create your own galleries

We'd love to hear your stories of migration, sport, working life or World War I

Find your crayons! Sharpen your coloured pencils! And enjoy adding colours in one of the books we have prepared for you.